View cart “Career Path” has been added to your cart.
Brainstorming Type Questionnaire
€0,00
You may only add one membership to your cart.

Brainstorming type questionnaire contains seven sections: Temperament, Individuality, Interconnection, Culture, Communication, Character and Skills was created. In the following, these seven sections are presented one by one.

Temperament is a term which defines the personal traits of an individual, as well as his values and attitude. However, it is an economic term, too. It matters, in business and life to know yourself – where you stand and where you want to end up. In practice, temperament, by and large, defines the expertise, the profession, and the field in which an individual pursues a career.

Individuality is closely connected with Character and Temperament, but it expresses the uniqueness of an individual which makes him different from the group. Therefore, individuality is what makes a personality to be independent thinker and doer. Although he has similar traits and behaviors with other people.

Interaction is relevant to Communication, but expression it is not at its core. For that reason, the main thing is how an individual or a team interacts with the world. It is critical in innovation, research, product development, investing and any other activity where micro and macro are mutually related. In a word, perception matters in action and interaction.

‘Culture eats strategy for breakfast’ is a quote credited to management consultant Peter Drucker. It is not only background, experience, and orientation – it is identity. People behave according to their beliefs and thoughts as much as to their environment. However, some environments allow talents to flourish and others do not.

Communication is at the heart of team building. Bringing people together who speak different ‘languages’ is the way to succeed in terms of growth, productivity and innovation. Consequently, great achievements in business and science are not coming by mixing up the ingredients. It is not a simple sum that generates great outcomes. Great products are the result of dynamic relationships.

‘Hire Character, train Skill ‘is a widely known quote credited to former CEO of Porsche, Peter Schutz. Meaning that, quite often, character and cultural fit is more important than skills. Although it is more difficult to get it right due to its subjective nature. The qualities of an individual belong to a long-term strategy which is what really matters if it is combined with competence, strong work ethic and willingness to learn. As it is said, skills can be taught or developed, though it is easier said than done. On the other hand, character cannot be changed as regards its core principles, values, and life view. As the author Zig Ziglar succinctly put it, “You don’t build a business, you build people, and then people build the business”.

Skills is a term which is used to describe technical knowledge of different forms and levels, but skills go far beyond that. Day by day, skills become a behavioral aspect of our own personality. That is why talent is a reference not only for work, business, and social life but, also, for sharing ideas, beliefs, and values. Nevertheless, talent is as much common as scarce. It is said among techies and geeks that good engineers can be ten to hundred times better than mediocre ones. However, the question will be ‘Is it teamwork or individuality which matters most in organizations?’ Of course, the answer depends on the context, the nature of skills and the leadership.

Be the first to review “Brainstorming Type Questionnaire” Cancel reply 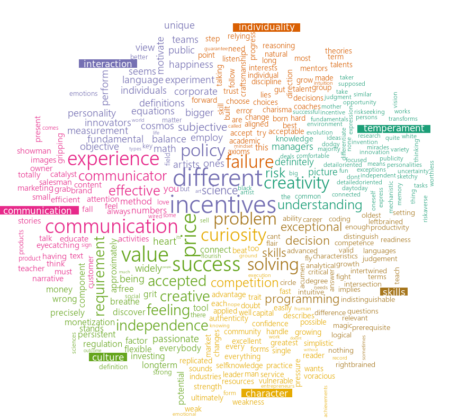